Chiara Cordelli is an associate professor in the Department of Political Science and the College at the University of Chicago. Her main areas of research are social and political philosophy, with a particular focus on theories of justice, political legitimacy, normative defenses of the state, the public/private distinction in liberal theory, and the ethics of philanthropy and assistance. Her work has appeared in Ethics, the Journal of Political Philosophy, Journal of Politics, Political Theory, Political Studies, British Journal of Political Science, and Critical Review of Social and Political Philosophy, as well as in several edited volumes, including NOMOS. One of her articles, “Justice as Fairness and Relational Resources” was included in the 2016 Philosopher’s Annual. She is also the co-editor of Philanthropy in Democratic Societies (University of Chicago Press, 2016).

Cordelli’s book, The Privatized State (Princeton University Press, 2020), is a philosophical reflection on an ongoing historical transformation: if the twentieth century was the age of the bureaucratization of the modern state, the twenty-first century is the age of its privatization. After providing a non-instrumental justification of the modern state, the book argues that the above transformation undermines the very reasons that compel the existence, and justify the authority of, political institutions in the first place, that is, to constitute a relationship of reciprocal independence among persons. As a response and way forward, the book articulates a pluralistic theory of administrative legitimacy, outlining the conditions that a legitimate system of public governance and administration should meet. It also develops principles of provisional and transitional justice for contexts where governance is already extensively privatized.

Cordelli earned her BA in philosophy from the University of Rome “La Sapienza,” where she studied aesthetics, critical theory, and the history of political thought. She then moved to London for an MA program, during which time she became interested in the Anglo-American analytic tradition. She earned her PhD in political philosophy from University College London in 2011. Before joining Chicago in 2015, she was a postdoctoral scholar at Stanford University (2011-2013) and a tenure-track assistant professor at the University of Exeter, UK (2013-2015). She held visiting positions at the Library of Congress in D.C. (2009-2010), the Center for Human Values at Princeton (2014-2015), the Center for Advanced Study in the Behavioral Sciences at Stanford (2012-2013) and the Safra Center for Ethics at Harvard (2017-2018). 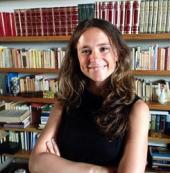