Demetra Kasimis teaches and writes about democracy and its dilemmas in ancient and contemporary contexts. She is interested in what makes a productive engagement with antiquity and specializes in problems of migration and political membership; gender and kinship; democratic instability and conspiracy; and interpretive method. Most of her work combines the insights of classical Greek thought with the critical tradition of continental political thought that examines formations of power and political identity. She holds a B.A. and M.A. from Columbia University, where she studied philosophy and Hellenic Studies, and a Ph.D. in political science from Northwestern.  At Chicago, she is an associated faculty member of the Department of Classics, a member of the affiliated faculty and board of the Center for the Study of Gender and Sexuality, and a fellow of the Chicago Center for Contemporary Theory (3CT).  Her research has been funded by the National Endowment for the Humanities, the American Council for Learned Societies, the Mellon Foundation, and the Fulbright Foundation. She is an editor of the journal Contemporary Political Theory. 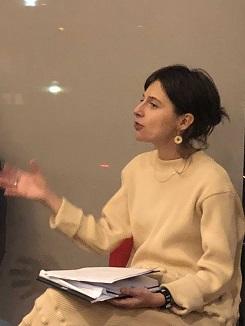