Larry's dissertation, "The Grounds of Abolition: Black Freedom and Land Politics in the Post-Emancipation United States," recovers an underappreciated account of political freedom offered in the thought of Harriet Jacobs, Thaddeus Stevens, Frederick Douglass, T. Thomas Fortune, Pauline Hopkins, and W.E.B. Du Bois. Radical Republican control of Congress in the early Reconstruction period inspired reformers to push beyond the constitutional prohibition of slavery and interrogate how the underlying dynamics of the institution of slavery could re-emerge in the postwar period. Thinkers of this early period (Jacobs, Douglass, Stevens) exposed how unequal land ownership fueled forms of domination in a post-slavery America. Industrialization and westward expansion jeopardized the presuppositions of Black agrarianism, but the dissertation shows that later thinkers (Fortune, Hopkins, and Du Bois) innovated on agrarian insights to retain land politics as central to the quest for Black freedom. Even in industrial contexts, Black agrarian abolitionists argued that unequal, privatized, and settler forms of land ownership threatened to extend white domination into the twentieth century. A core argument of the dissertation is that policies and practices of land ownership conserve racial hierarchy in the United States, reorienting us toward a vision of democratic repair that attends to material conditions of spatial freedom.

Larry's work has been supported by grants from the Center for the Study of Race, Politics, and Culture and the Social Science Research Center at the University of Chicago as well as the Salvatori Center for the Study of Individual Freedom in the Modern World at Claremont McKenna College. His writing can be found in American Political Thought and the Chicago Sun-Times.

Larry holds a BA (with Honors) in Political Science, Economics, and Critical Theory from Northwestern University and an MA from the University of Chicago. 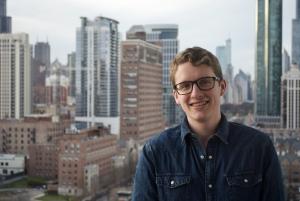