Patricia Posey is a Provost's Postdoctoral Fellow at the University of Chicago as well as the Political Science Department’s junior faculty member for the Race and Capitalism Project, where she specializes in race and American political economy.

Her current book project examines the effects of different banking and loan institutions on political attitudes and political participation. She is particularly interested in the effects of check cashing institutions, payday loan companies, pawn shops, and the like (collectively known as the fringe economy) on the atittudes of poor, black, and brown communities toward the state. The manuscript is based on her award winning dissertation project which was awarded the Urban Politics Section’s Byran Jackson Dissertation Research on Minority Politics Award and supported by the Ford Foundation Dissertation Fellowship, the University of Pennsylvania School of Arts and Sciences’ Teece Fellowship, and the Department of Political Science.

Dr. Posey’s research broadly examines the relationship between American political economy and race, with a focus on the links among capitalism, urban space, technology, and political behavior. She has a book chapter with Daniel Gillion on the effects of minority protest on government responsiveness that is forthcoming with Cambridge University Press. Additionally, she has published with The Washington Post Monkey Cage and the Journal of Race, Ethnicity, and Politics - Politics of Color. More about her research is available here. 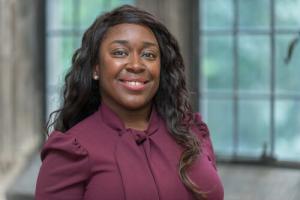