Professor Suny is currently working on a study of the young Stalin and the formation of the Soviet Union and a series of essays on empire and nations. Professor Suny has served as chairman of the Society for Armenian Studies and on the editorial boards of Slavic Review, International Labor and Working-Class History, International Journal of Middle East Studies, The Armenian Review, Journal of the Society for Armenian Studies, and Armenian Forum, and is a contributing editor to Armenian International Magazine. He has appeared numerous times on the McNeil-Lehrer News Hour, CBS Evening News, CNN, and National Public Radio, and has written for The New York Times, The Washington Post, The Los Angeles Times, The Nation, New Left Review, Dissent, and other newspapers and journals. He is married to pianist Armena Marderosian and has two daughters, Sevan and Anoush Suni.

Professor Suny's intellectual interests have centered on the non-Russian nationalities of the Russian Empire and the Soviet Union, particularly those of the South Caucasus (Armenia, Azerbaijan, and Georgia). The "national question" was an area of study that was woefully neglected for many decades until peoples of the periphery mobilized themselves in the Gorbachev years. His aim has been to consider the history of imperial Russia and the USSR without leaving out the non-Russian half of the population, to see how multinationality, processes of imperialism and nation-making shaped the state and society of that vast country. This in turn has led to work on the nature of empires and nations, studies in the historiography and methodology of studying social and cultural history, and a commitment to bridging the often-unbridgeable gap between the traditional concerns of historians and the methods and models of other social scientists. 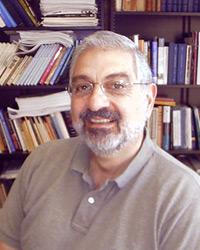